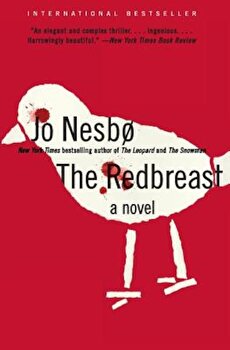 
Jo Nesbo's The Snowman is soon to be a major motion picture, starring Michael Fassbender, Rebecca Ferguson, and J.K. Simmons. "An elegant and complex thriller....Harrowingly beautiful." -- New York Times Book Review "A hugely impressive achievement--ambitious in scope, and skilled in execution." -- Los Angeles Times " The Redbreast certainly ranks with the best of current American crime fiction." -- Washington Post No disrespect meant to Henning Mankell and Stieg Larsson, but Jo Nesbo, the New York Times bestselling author of The Snowman , is the most exciting Scandinavian thriller writer in the crime fiction business. The Redbreast is a fabulous introduction to Nesbo's tough-as-nails series protagonist, Oslo police detective Harry Hole. A brilliant and epic novel, breathtaking in its scope and design--winner of The Glass Key for best Nordic crime novel and selected as the best Norwegian crime novel ever written by members of Norway's book clubs-- The Redbreast is a chilling tale of murder and betrayal that ranges from the battlefields of World War Two to the streets of modern-day Oslo. Follow Hole as he races to stop a killer and disarm a ticking time-bomb from his nation's shadowy past. Vogue magazine says that "nobody can delve into the dark, twisted mind of a murderer better than a Scandinavian thriller writer..".and nobody does it better than Jo NesboJames Patterson fans should also take note.

One Door Away from Heaven, Paperback/Dean Koontz

Aaron's Shadow: They Never Saw Him Coming, Paperback/R. a. Bates

The Light of Day, Paperback/Graham Swift

The Woman in the Window, Paperback/A. J. Finn