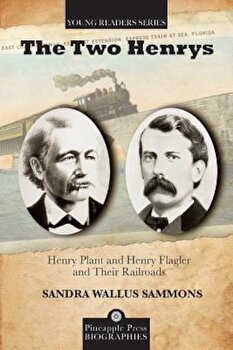 
They shared first names. They both first came to Florida looking for a healthy place for their wives. And they both fell in love with the place and with its potential. Henry Plant and Henry Flagler also shared passions for railroads and hotels--and they both ignored the word "impossible." Henry Plant, who had steamships in addition to railroads, was determined to have his trains running to a port for ships on the west coast of Florida. In 1884 Plant realized his dream when his rails reached Tampa. With the grand opening of his fantastic Tampa Bay Hotel in 1891, Plant reached another goal. Henry Flagler first visited Florida in 1878, and he liked what he saw. He came back and built railroads and grand hotels along the east coast so that Northerners could enjoy the beauties of the state. By the end of his long and productive life, he had built a railroad all the way to the very end of the Keys. It arrived in Key West in 1912. Both Henrys were very determined and practical. They met all the great challenges they set for themselves. Their efforts brought growth and development to both coasts of Florida. Ages 12 and up Next in series > > See all of the books in this series

Who Was Albert Einstein', Hardcover/Jess Brallier

Under the Ramadan Moon, Paperback/Sylvia Whitman

Day of the Dead, Hardcover/Julie Murray

About Arachnids: A Guide for Children, Paperback/Cathryn Sill

Hawk Mother: The Story of a Red-Tailed Hawk Who Hatched Chickens, Hardcover/Kara Hagedorn

All about China: Stories, Songs, Crafts and More for Kids, Hardcover/Allison Branscombe

How to Talk to Your Dog, Paperback/Jean Craighead George

I Want to Be a Dentist, Paperback/Dan Liebman