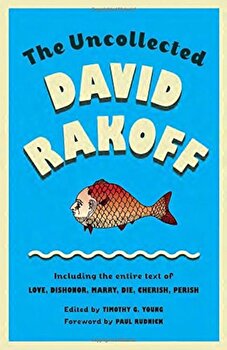 
Bestselling and Thurber Prize winning humorist David Rakoff was one of the most original, delightfully acerbic voices of his generation. Here, in one place, is the best of his previously uncollected material most never before published in book form. David Rakoff s singular personality spills from every page of this witty and entertaining volume, which includes travel features, early fiction works, pop culture criticism, and transcripts of his most memorable appearances on public radio s Fresh Air and This American Life . These writings chart his transformation from fish out of water, meekly arriving for college in 1982, to a proud New Yorker bluntly opining on how to walk properly in the city. They show his unparalleled ability to capture the pleasures of solitary pursuits like cooking and crafting, especially in times of trouble; as well as the ups and downs in the life-span of a friendship, whether it is a real relationship or an imaginary correspondence between Gregor Samsa and Dr. Seuss (co-authored with Jonathan Goldstein). Also included is his novel-in-verse Love, Dishonor, Marry, Die, Cherish, Perish . By turns hilarious, incisive and deeply moving, this collection highlights the many facets of Rakoff s huge talent and shows the arc of his remarkable career. With a foreword by Paul Rudnick.

Laughter Still Is the Best Medicine: Our Most Hilarious Jokes, Gags, and Cartoons, Paperback/Editors of Reader's Digest

Point Your Face at This: Drawings, Paperback/Demetri Martin

If You Didn't Bring Jerky, What Did I Just Eat': Misadventures in Hunting, Fishing, and the Wilds of Suburbia, Paperback/Bill Heavey

200 Skills Every Fashion Designer Must Have: The Indispensable Guide to Building Skills and Turning Ideas Into Reality, Paperback/Aisling McKeefry

How Not to Be a Dick: An Everyday Etiquette Guide, Hardcover/Meghan Doherty

Based on a True Story: Not a Memoir, Paperback/Norm MacDonald

Don't Squat with Your Spurs on: A Cowboy's Guide to Life, Paperback/Texas Bix Bender