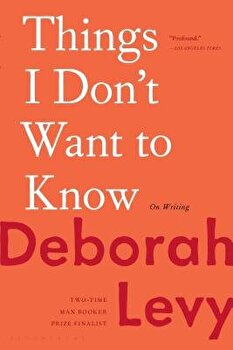 Things I Don't Want to Know: On Writing, Paperback/Deborah Levy


A shimmering jewel of a book about writing from two-time Booker Prize finalist Deborah Levy, to publish alongside her new work of nonfiction, The Cost of Living . Blending personal history, gender politics, philosophy, and literary theory into a luminescent treatise on writing, love, and loss, Things I Don't Want to Know is Deborah Levy's witty response to George Orwell's influential essay "Why I Write." Orwell identified four reasons he was driven to hammer at his typewriter--political purpose, historical impulse, sheer egoism, and aesthetic enthusiasm--and Levy's newest work riffs on these same commitments from a female writer's perspective. As she struggles to balance womanhood, motherhood, and her writing career, Levy identifies some of the real-life experiences that have shaped her novels, including her family's emigration from South Africa in the era of apartheid; her teenage years in the UK where she played at being a writer in the company of builders and bus drivers in cheap diners; and her theater-writing days touring Poland in the midst of Eastern Europe's economic crisis, where she observed how a soldier tenderly kissed the women in his life goodbye. Spanning continents (Africa and Europe) and decades (we meet the writer at seven, fifteen, and fifty), Things I Don't Want to Know brings the reader into a writer's heart. About the Author: Deborah Levy, FRSL , writes fiction, plays, and poetry. Her work has been staged by the Royal Shakespeare Company, widely broadcast on the BBC, and translated into fourteen languages. The author of highly praised novels, including Hot Milk and Swimming Home (both Man Booker Prize finalists), The Unloved , and Billy and Girl , and the story collection Black Vodka , she lives in London.