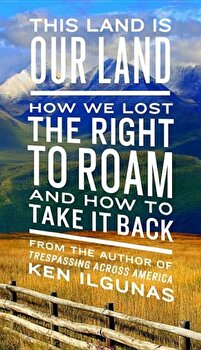 This Land Is Our Land: How We Lost the Right to Roam and How to Take It Back, Paperback/Ken Ilgunas


Private property is everywhere. Almost anywhere you walk in the United States, you will spot ``No Trespassing`` and ``Private Property`` signs on trees and fence posts. In America, there are more than a billion acres of grassland pasture, cropland, and forest, and miles and miles of coastlines that are mostly closed off to the public. Meanwhile, America's public lands are threatened by extremist groups and right-wing think tanks who call for our public lands to be sold to the highest bidder and closed off to everyone else. If these groups get their way, public property may become private, precious green spaces may be developed, and the common good may be sacrificed for the benefit of the wealthy few. Ken Ilgunas, lifelong traveler, hitchhiker, and roamer, takes readers back to the nineteenth century, when Americans were allowed to journey undisturbed across the country. Today, though, America finds itself as an outlier in the Western world as a number of European countries have created sophisticated legal systems that protect landowners and give citizens generous roaming rights to their countries' green spaces. Inspired by the United States' history of roaming, and taking guidance from present-day Europe, Ilgunas calls into question our entrenched understanding of private property and provocatively proposes something unheard of: opening up American private property for public recreation. He imagines a future in which folks everywhere will have the right to walk safely, explore freely, and roam boldly--from California to the New York island, from the Redwood Forest to the Gulf Stream waters.

Iditarod Adventures: Tales from Mushers Along the Trail, Paperback/Lew Freedman

Marley and the Kittens, Hardcover/John Grogan

Creatures of the Deep, Paperback/Matthew Rake

The Quest for Environmental Justice: Human Rights and the Politics of Pollution, Paperback/Robert D. Bullard

The Raccoon Next Door: Getting Along with Urban Wildlife, Paperback/Gary Bogue

The Wonder of It All: 100 Stories from the National Park Service, Paperback/Yosemite Conservancy

The First Dinosaur: How Science Solved the Greatest Mystery on Earth, Hardcover/Ian Lendler

M Is for Minnie/Megan Roth

Amazing You!: A Celebration of Individuality, Paperback/Connie Goyette Crawley