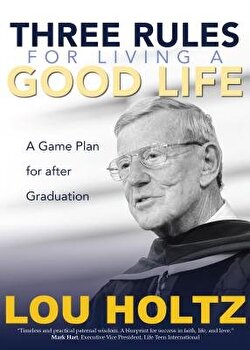 
Description Legendary former Notre Dame football coach Lou Holtz shared three easy to remember and impossible to forget rules for life during a commencement address at Franciscan University Steubenville. Do what is right. Do everything to the best of your ability. Show people you care. Now expanded into book form, Three Rules for Living a Good Life: A Game Plan for after Graduation offers a quick, sometimes humorous, and always practical formula for recent college graduates and other young adults to reach success in their business, personal, and spiritual lives. Three Rules for Living a Good Life is a great gift book for a young adult looking for a quick read that offers encouragement and concrete advice for transitioning to the workforce and to deeper, more committed relationships. Lou Holtz, one of the most successful college football coaches of all time, a college football analyst, and a premier motivational speaker, shares a message that is genuine and sensible. Punctuated with examples for keeping and living the rules each day from his years of working with teams, in business, and with his family, Holtz's book keeps the discussion light, humorous, and real. Holtz's commencement message is one he often shares with business leaders around the world. He points to the foundation of his Christian faith and the necessity for young adults who have been raised in the faith to take stock of themselves at this crossroads of their life. "Don't ignore God Don't give up the faith " he writes. A sought-after motivational speaker, Holtz annually gives hundreds of presentations on topics having to do with leadership, success, and achieving peak results. Holtz has also given many commencement addresses and been awarded a number of honorary degrees. In Three Rules for Living a Good Life , this iconic Notre Dame football coach and television and radio analyst sums up his essential graduation message that college grads will find useful as they take their places in the "real world." About the Author Lou Holtz is a Hall of Fame college football coach who served as the head football coach at the University of Notre Dame from 1985 to 1996, leading the Fighting Irish to the consensus national championship in 1988. He also coached at the William and Mary College (1969-71), North Carolina State (1972-1975), Arkansas (1977-83), University of Minnesota (1984-85), and the University of South Carolina (1999-2004). Holtz was the head coach of the New York Jets during the 1976 season. He also is a popular motivational speaker and an author of several books, including the New York Times bestselling The Fighting Spirit about Notre Dame's 1988 championship season; his autobiography, Wins, Losses, and Lessons ; and A Teen's Game Plan for Life . After leaving coaching, Holtz became a college football analyst for ESPN. He retired in 2015, but continues to work as a college football and golf analyst for SiriusXM radio. Holtz earned his bachelor of science degree from Kent State University in 1959, and a master's degree in education from the University of Iowa in 1961. He also has received numerous honorary doctorate degrees. He was inducted into the College Football Hall of Fame in 2008. He has received a number of honors not only for coaching but also for his philanthropy. Holtz and his wife, Beth, have four grown children. They live in Orlando, Florida.

Shattering Your Strongholds: Freedom from Your Struggles, Paperback/Liberty Savard

God Is Not Nice: Rejecting Pop Culture Theology and Discovering the God Worth Living for, Paperback/Ulrich L. Lehner

Dark Majesty Expanded Edition: The Secret Brotherhood and the Magic of a Thousand Points of Light, Paperback/Texe Marrs

Preaching While Bleeding: Is There A Prophet in the House?, Paperback/H. Beecher Hicks Jr

A Peculiar Journey: Understanding Joy in Suffering on the Road to Huruma, Paperback/Charles J. Prichard

Singing Through the Night: Courageous Stories of Faith from Women in the Persecuted Church, Paperback/Anneke Companjen

I Was Born to Destroy Hell, Paperback/Tim Ehmann

Christmas Is Not Your Birthday: Experience the Joy of Living and Giving Like Jesus, Paperback/Mike Slaughter

The Franciscan Heart of Thomas Merton: A New Look at the Spiritual Inspiration of His Life, Thought, and Writing, Paperback/Daniel P. Horan