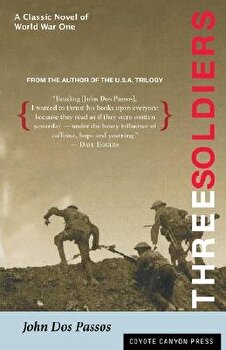 
Description Wikepedia: Three Soldiers is a 1921 novel by the American writer and critic John Dos Passos. It is one of the key American war novels of the First World War, and remains a classic of the realist war novel genre. The disillusionment John Dos Passos felt for the Great War forms the core of THREE SOLDIERS, which stands as a denunciation of the military and its exploitation of young men. The novel chronicles the wartime experiences of a trio of American privates from different backgrounds: Andrews, a gifted musician and Harvard graduate from New York; Fuselli, a store clerk who hopes to impress a girl back home in San Francisco; and Chrisfield, an easygoing farm boy from Indiana. Recognized as a masterpiece when first published more than seventy-five years ago, THREE SOLDIERS still stands as a testament to the dehumanizing effects of war.