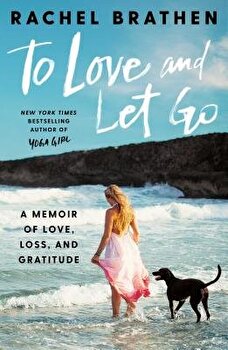 
Description To love and let go, love and let go, love and let go...it's the single most important thing we can learn in this lifetime. While on her way to teach a yoga retreat in March 2014, Rachel Brathen collapses at an airport, brought to her knees by excruciating stomach pains. She is rushed to the hospital on the tiny island of Bonaire, and hours later forced to undergo surgery. When she wakes up from anesthesia, her boyfriend is weeping at her bedside. At the same time Rachel collapsed, her best friend, Andrea, crashed her car into a truck driving on the wrong side of the highway. Andrea spent eight hours fighting for her life while Rachel spent the same hours in a hospital bed in another country, moving through a pain no one could seem to explain. The moment Rachel's pain went away was the moment Andrea drew her last breath. Rachel and Andrea had a magical friendship. The kind of friendship that is forged in youth and grows into something deeper--a sisterhood that is rare and lucky. Though they looked nothing alike--one girl tall, blond, and Swedish; the other short, brunette, and Colombian--everyone called them gemelas twins. Over the next three years following Andrea's death, at what might appear from the outside to be the happiest time of her life--engaged to the man she loves and with an exploding yoga career that takes her all over the world--Rachel faces a series of trials that have the potential to define her life. When you lose your best friend, your grandmother, and your dog within the span of a few months, how do you move on? Unresolved grief and trauma from her childhood make the weight of her sadness unbearable. Death, illness, and family turmoil overwhelm her, sending Rachel into a depression. At each turn, she is confronted again and again with a choice: will she lose it all and succumb to grief, be consumed by pain, and grasp for control that's beyond her reach? Or can she move through the loss, surrender to life, and let go? When Rachel and her husband conceive a child, Rachel sees her pregnancy as a time to heal and an opportunity to be reborn herself. As she recounts this transformative period in her life, Rachel shares what she's learned about life and death, love and fear, what it means to be a mother and a daughter, and how to become someone who walks through the fire of adversity through the never-ending practice of loving hard and letting go. Annotation From the New York Times -bestselling author of Yoga Girl and "international force in the world of yoga" ( Allure ) comes a moving and inspirational memoir on how to cope with tragedy, adversity, and change through yoga.