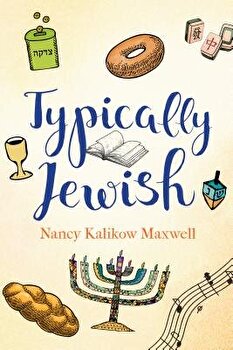 
Description Is laughter essential to Jewish identity? Do Jews possess special radar for recognizing members of the tribe? Since Jews live longer and make love more often, why don't more people join the tribe? "More deli than deity" writer Nancy Kalikow Maxwell poses many such questions in eight chapters--"Worrying," "Kvelling," "Dying," "Noshing," "Laughing," "Detecting," "Dwelling," and "Joining"--exploring what it means to be "typically Jewish." While unearthing answers from rabbis, researchers, and her assembled Jury on Jewishness (Jewish friends she roped into conversation), she--and we--make a variety of discoveries. For example: Jews worry about continuity, even though Rabbi Mordechai of Lechovitz prohibited even that: "All worrying is forbidden, except to worry that one is worried." Kvell-worthy fact: About 75 percent of American Jews give to charity versus 63 percent of Americans as a whole. Since reciting Kaddish brought secular Jews to synagogue, the rabbis, aware of their captive audience, moved the prayer to the end of the service. Who's Jewish? About a quarter of Nobel Prize winners, an estimated 80 percent of comedians at one point, and the winner of Nazi Germany's Most Perfect Aryan Child Contest. Readers will enjoy learning about how Jews feel, think, act, love, and live. They'll also schmooze as they use the book's "Typically Jewish, Atypically Fun" discussion guide. About the Author Nancy Kalikow Maxwell is a librarian, an award-winning writer, and a frequent contributor to Jewish media. She is the author of six books and the creator of funny cards for Hallmark's Tree of Life Jewish card line.

Yes, There Is a God. . . and Other Answers to Life's Big Questions, Paperback/John Bergsma

Animals in Spirit: Our Faithful Companions' Transition to the Afterlife, Paperback/Penelope Smith

The Steampunk Tarot: Wisdom from the Gods of the Machine [With Cards], Paperback/John Matthews

Final Word: Why We Need the Bible, Hardcover/John MacArthur

How to See Yourself as You Really Are, Paperback/His Holiness the Dalai Lama

What Are We Waiting For': Finding Meaning in Advent & Christmas, Paperback/Richard Leonard

Laugh Your Way to a Better Marriage: Unlocking the Secrets to Life, Love, and Marriage, Paperback/Mark Gungor

Fundamentals of the Faith: Essays in Christian Apologetics, Paperback/Peter Kreeft