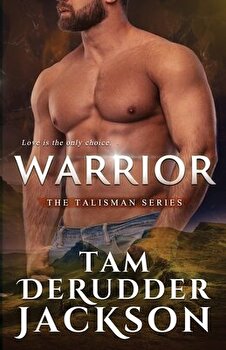 
Only she can save her home ... Upon turning twenty-five, Ceri Ross inherits an estate in Scotland. To avoid losing the druidic enchantments that have kept her alive since her parents' deaths, she must spend a year at Conlan Manor. When she arrives, she discovers the old druid caretaker isn't the only one sharing the mansion with her--an uninvited guest is lurking. She calls the security company run by her best friend's husband and anticipates he'll set up a system to catch her midnight visitor. Business keeps Rowan Sheridan in the States, but his brother Rio is free--Rio Sheridan, the one man she can't stop thinking about even though he can never be hers. Only he can save her... Ceri Ross is a flirt and a talisman with obligations to the warrior community. She must bond with her fated mate and not spend time with random unattached warriors, yet it seems to Rio that she didn't get the memo. None of which helps him: the woman calls to him like a siren. A clan is counting on them. Hamish Buchanan has taken care of Conlan Manor for years. The energy swirling around the Conlan heir and the big American warrior she's hired to protect the most secure stronghold in the Highlands gives him hope. If Ceri's warrior discovers his mate within the confines of the manor, the clan will enjoy enhanced protections from the violent war goddesses for ten generations. If only Ceri and Rio would stop sparring long enough to figure out they belong to each other...

Worth Any Cost, Paperback/Brenna Aubrey

The Promise of Amazing, Paperback/Robin Constantine