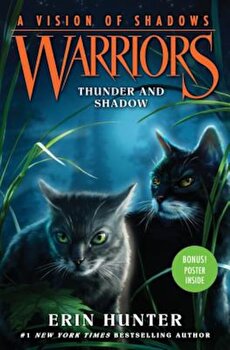 Warriors: A Vision of Shadows '2: Thunder and Shadow, Hardcover/Erin Hunter


Erin Hunter's #1 bestselling Warriors series continues with the second book in the A Vision of Shadows arc. This hardcover edition also includes a double-sided jacket with a bonus poster Nearly a moon has passed since Alderpaw returned from his journey to SkyClan's gorge, where he found the territory taken over by rogues. Now the same vicious cats that drove out SkyClan have traced Alderpaw's path back to the lake... and ShadowClan may be the next to fall. Full of epic adventure and thrilling intrigue, this fifth Warriors series is the perfect introduction for readers new to the Warriors world--while for dedicated fans, it's a long-awaited return to the era of Bramblestar's ThunderClan, after the events of Omen of the Stars.