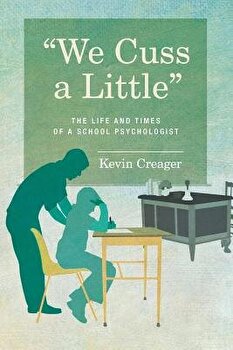 
When Kevin Creager started his career as a school psychologist in Ohio, little did he know the way parents answered the questions on the developmental history forms could tell him more about his students than the actual answers to the questions themselves. For instance, when asked "What language is spoken in the home?" one family answered, "We cuss a little." Creager realized answers such as this held the key to understanding his students' home lives-so he spent the next thirty years recognizing and collecting these gems. In We Cuss a Little, Creager compiles over thirty years' worth of stories, anecdotes, and observations gathered while working as school psychologist. Far from a philosophical treatise on education or a dry rendering of the subject, Creager's stories share the struggles and triumphs of real school employees and the children and families with which they work. Creager believes that, more than test scores, report card grades, or special education labels, these parents' answers, and the stories behind them, can give educators a much better understanding of what really goes on in the lives of the children they serve. About the Author: Kevin L. Creager has been a "practicing" school psychologist in a variety of settings for thirty-seven years. Working in a rural county system, an inner-city urban school district, and a village with only three schools, Creager boasts a wide range of experiences from which to draw. He has worked with students aged two to twenty-two, as well as students with autism and other low-incidence disabilities. Beyond working directly with children, Creager has served on many district committees, including two state committees within Ohio: School Psychologists Crisis Response and Supervision of School Psychologists. He's also participated in the national Crisis Response Interest Group and presented at local, state, and national levels on topics such as crisis response, preschool assessment, autism assessment, and school problem-solving teams. Creager is married to Sue, a physical therapist, and they have three grown children who are all married.