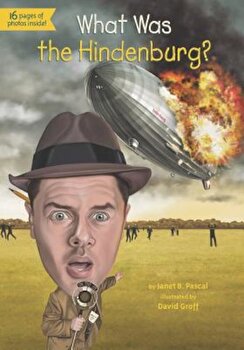 What Was the Hindenburg', Paperback/Janet B. Pascal


At 800-feet long, the Hindenburg was the largest airship ever built--just slightly smaller than the TitanicAlso of a disastrous end, the zeppelin burst into flame as spectators watched it attempt to land in Lakehurst, New Jersey on May 6, 1937. In under a minute, the Hindenburg was gone, people jumping from windows to escape. However, only 62 of the 97 crew members and passengers onboard survived. The exact cause of the disaster is still unknown and remains a fascinating historical mystery perfect for this series.

All about Me: My Thoughts, My Style, My Life, Paperback/Ellen Bailey

A Study Guide for Edith Wharton's the Age of Innocence, Paperback/Cengage Learning Gale

Let the Children Play: How More Play Will Save Our Schools and Help Children Thrive, Hardcover/Pasi Sahlberg

Math: A Book You Can Count On! 'With Poster', Paperback/Simon Basher