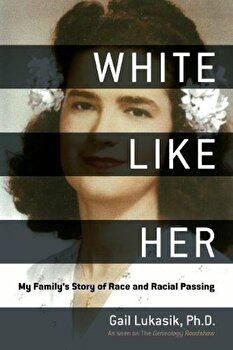 White Like Her: My Family's Story of Race and Racial Passing, Hardcover/Gail Lukasik


White Like Her: My Family's Story of Race and Racial Passing is the story of Gail Lukasik's mother's ``passing,`` Gail's struggle with the shame of her mother's choice, and her subsequent journey of self-discovery and redemption. In the historical context of the Jim Crow South, Gail explores her mother's decision to pass, how she hid her secret even from her own husband, and the price she paid for choosing whiteness. Haunted by her mother's fear and shame, Gail embarks on a quest to uncover her mother's racial lineage, tracing her family back to eighteenth-century colonial Louisiana. In coming to terms with her decision to publicly out her mother, Gail changed how she looks at race and heritage. With a foreword written by Kenyatta Berry, host of PBS's Genealogy Roadshow , this unique and fascinating story of coming to terms with oneself breaks down barriers.

Spoken from the Heart, Hardcover/Laura Bush

Everybody's Got Something, Paperback/Robin Roberts

Death in the City of Light: The Serial Killer of Nazi-Occupied Paris, Paperback/David King

Sum It Up: 1098, a Couple of Irrelevant Losses, and a Life in Perspective, Paperback/Pat Head Summitt

Nightingale Tales: Stories from My Life as a Nurse, Paperback/Lynn Dow RN

Kennedy and King: The President, the Pastor, and the Battle Over Civil Rights, Paperback/Steven Levingston

Singing in the Wilderness, Paperback/Luana Stoltenberg

Life Would Be Perfect If I Lived in That House, Paperback/Meghan Daum

The Woman Who Fooled the World: Belle Gibson's Cancer Con, and the Darkness at the Heart of the Wellness Industry, Paperback/Beau Donelly

My Grandfather Would Have Shot Me: A Black Woman Discovers Her Family's Nazi Past, Paperback/Jennifer Teege

A Woman Looking at Men Looking at Women: Essays on Art, Sex, and the Mind, Paperback/Siri Hustvedt

The Hard Way on Purpose: Essays and Dispatches from the Rust Belt, Paperback/David Giffels

The First Muslim: The Story of Muhammad, Paperback/Lesley Hazleton